Compact Disks in the Matrix

A few months back, Barbara and I  decided that it would be cool to have CDs in our car. Remember those? We got a few from a friend and a couple more from a garage sale. They are themselves an activity.

Barbara grabs the case, flips it over and reads off track #8. 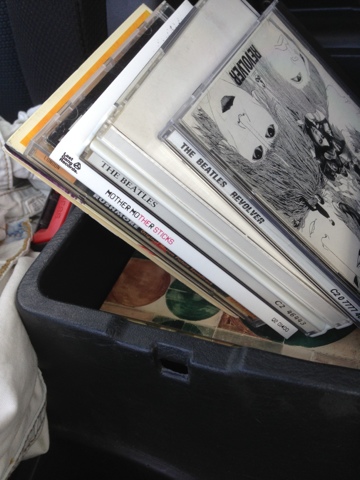 The boys in the back get to contribute.

"It's got soft drums and a lot of horns. Not too much singing."

The best part about the whole thing is that the player doesn't work very well. It grabs the disk and spins with it continuously. The only way to get it to break out of its funk is to slam your hand on the dash overtop of it. Amazing, right? Just like Biff Tannon back in the 50's.

Slam it once or twice and you've got tunes!

In conclusion, I am promoting this practice.
Posted by Brett at 6:27 PM No comments:

The punching bag of Faith

Donald Miller has always been someone that I pay attention too.  His books are thinkers, leading the reader to struggle with questions rather than being presented with 12 easy steps to the answers.  If we're honest, life is a struggle.  Walking through each day, trying to be good, trying to walk humbly each moment, is a complete struggle.

In this way, I have appreciated his honesty.  Some sort of disgruntled fan once asked him how he would feel if his biggest struggles and temptations were made known to the world.  I can't quite remember the context, but the person seemed to be embarrassed by something Miller has said.  The fan tried to turn the tables on Miller.  How would that make him feel?  Well, Miller responded by mentioning that they are all in his books, and for good measure, he named his biggest temptations all right there on Twitter for all to see.  I liked the way he defused the situation with honesty.

This past week I came across this blog post

It's a good read.  It touches on an issue I've been thinking about for quite some time.  Truth is a complex thing, and it is the trump card for a lot of arguments and disagreements.  The final say seems to be just saying "Truth", and noting that it's with a capital "T" seems to help a lot as well.

Of course, what comes into question at the same time is doubt.  A lot of people hate the word.  It is often referred to as a stumbling block for seekers, and a heretical backslide for Christian believers.

Someone once said that the opposite of Faith isn't doubt, it's certainty.  Doubt goes along with Faith.  If I don't doubt anything, then I am certain of it and, by definition, I don't have to have Faith in it at all.

I like the guy.  He's hilarious, and I like that he's not afraid to punch it out with Christians that try so hard to defend their own Faith.  They feel threatened by him, and I think that's what he's going for.  The critic tries to corner him and Gervais' response is genius, not to mention in line with what he's been arguing all along:  I can't prove God's real, so I don't believe in him.

Christians have been trying for a long, long time to prove that God exists.  There are a lot of scientific/detective books that have come out that like to try to have the final say.  But, is that what God is all about?  Is he just waiting for us to spell it all out for everyone?  Is the mystery solved?  Game over?

Is the whole truth of God in the Bible?  If we just look hard enough?  As Miller suggests, it would be pretty sad if we knew all there is to know about it already.  It is mysterious, and the dark glass is still pretty darn dark.  Is that okay?  I think so.

We can call God a father, but he's not a man.  He's God.  Jesus is a man and God, which is another mysterious truth in itself.  Is Heaven paved with gold or is gold the closest word we have to describe the beauty of eternity?  I tend to believe that God has stooped down into our human terms so that we could somehow grasp at some sort of meaning of describing him.  He probably thinks it's cute.

Both Miller and Gervais come at the issue of Truth with the same thing; honesty.  It's a trait that screams truth.  If you struggle with something, be honest about it.  Hiding behind "because the bible says so" isn't strengthening your Faith.  Doubt strengthens Faith because it gives it something to wrestle with.  In a way, it's like a punching bag in Faith's gym.  It's good for you.

Too cheesy?  Sorry about that.

I know that most Christians have doubts, but they are too scared to talk about them.  At the very least, they know that they don't have it all figured out yet, but it's too convenient to answer with "Truth".  In many cases, honesty will speak love because it makes you vulnerable.  Vulnerability is great because it is genuine, real, and true.  It opens you up to others, and in turn opens them up to you.  For most people, this is where the conversation will start.  Yet, getting to the start is often the hardest thing to do.

Firstly, my boys are having a great month of development.  Jonas is confident with his less than perfect English, which is a joy for all around to hear.  He is also taking swimming lessons for 2 weeks and he is making "great strides" in that area.  I am told that he can hold his head under water and even jump off of the low diving board.  Jonas is also able to do this!

Miles is also swimming.  Witnesses have told me that he his able to swim under water for 2 meters at a time.  Miles has also been riding his bike around the camp, but seems to me more interested in this:


Barbara has also done some nice things.  She challenged the first year exam for her Early Childhood Development diploma.  She achieved a high enough score to by-pass 18 courses and will start on the remaining 6 in a few weeks.  She is a great hero of mine.

Most of this fun is being had while I am working.  Actually, tomorrow my boys will go to their first movie theatre without me.  I am kind of sad about that, but also kind of happy that they can finally go experience the overpriced adventure with their mom and friends.

I am enjoying work.  I have great people around me.  I am on a computer a lot, which is not very good for me, but I wear my glasses more often these days, so that is good.

I hope that your summer is going well.  For the first time in a while I am understanding how difficult it can be to make time to hang out with loved ones. I am working on that.  It needs to be scheduled, even.  I hope that you can take up the responsibility and challenge to do the same with yours.

An interesting thing about people is that we are guarded.  We walk around with imaginary walls to keep out whatever might come our way.  This means that our lives are full of chit chat and how ya doin'.  Small talk isn't a completely evil thing, but I think that there is at least a little evil in it.

The strange thing is that most of us like other people.  Walking around with our walls and chit chat, we are a bunch of lonely suckers.  This is irony, right?  We've only got a a half dozen decades here and we're spending most of it worried about what other people think of us while they're thinking about what we think of them.

The tragic thing is that we all know this.  We all know that the other guy thinks the same things as us, wants the same interaction and depth as us, feels the same hurts as us.  We know it all.  If we look close enough we'll see it in the other's eyes when we fluff on about shallow things.  We know all this, and yet we let this ironic story unfold again and again.  We hit blips of wholeness, trust, and community, but most of the time we trudge through the day with a burden of miserable loneliness on our back.  This burden is a like a sack of rocks.  A bag of useless coal.
Posted by Brett at 6:17 PM No comments: