My Favorites of this year (Closer to the Heart)

I really like movies. This year I seem to have watched hundreds of them. I took a film school and they gave us a list of about 120 to watch before we arrived, so that's a bunch right there.

The funny thing is that before I learned about film and how it all works I was very picky in my tastes. There would be certain types of movies that I would never watch, much like my taste in music, I just couldn't listen/watch anything. I was picky.

So, when I went to do the school I thought that things would get even worse. I wondered, "Will I like watching movies after these next few months?", and the truth is that I do. In fact, I like all kinds of movies now and I'll pretty much watch anything. Maybe its just because I am getting older so my taste is changing. A dirty little secret is that I am starting to like listening to Rush. The truth is that Rush had been one of my least favorite bands for quite a long time. What is happening to me?!!!

Okay, so lets get down to it. I wanted to share with you my favorite movies of the year. Some of them are nominated and some are not. I'm not a critic. I just want to share with you some of the movies I've seen this year that I think you would enjoy, if not ecstatically, then at least in some small way. Here we go, in a kind of particular order but not really*:

Black Swan* (Natalie Portman) - A very tense/beautiful movie about ballet. I like looking into topics that I know nothing about. Ballet is one of them. Natalie Portman and the guy that plays the director are very good in this.

Inception (Leo) - Everyone has seen this. Almost everyone has seen in 3 or 4 times. I've seen it twice, and read the screenplay. Though there seem to be a lot of holes in the plot, the story is very compelling and thought provoking.

127 Hours (Danny Boyle) - The director of Transpotting, 28 Days Later, and Slumdog Millionaire writes for the first time with this story. This could have been pretty boring. It turned out to be quite interesting. I am really starting to like Danny Boyle's style.

Never Let Me Go (Carey Mulligan, Andrew Garfield) - A Sci-Fi movie without any Sci-Fi effects in it. The future? The past? The acting and the settings in this movie are very pleasing to watch.

The Book of Eli (The Book) - Without spoiling things, regardless of what Eli is trying to accomplish, it is cool to see that he is doing more than just trying to survive.

Shutter Island (Leo) - Kind of a "He's either dead or He's dreaming or that guy's not real" kind of movie. Even though a combination of those conclusions is just about on the mark, its still interesting to watch, and the conclusion is open for debate, much like Inception.

The Other Guys (Will Ferrell) - I watched this on the plane. I can't remember too much about it but I was pleasantly surprised by the on screen chemistry of Ferrell and Mark Wahlberg. I laughed out loud quite a bit, and isn't that something we can all enjoy?

The Town (Ben Affleck) - This handsome fellow is 2 for 2 in my books. Gone Baby Gone and this one are two very interesting movies. I really like his brother as an actor as well.

The Social Network (The story) - As a friend pointed out, this movie just keeps moving. Every scene has something happening. Part of it might be the "Oh look, they are creating Facebook now" aspect, but in general I think that this is a very interesting story full of relationship flaws. Kids with money? Check. Justin Timberlake? Check. Rowing? Check.

Red (Everyone shoots people) - This one was fun to watch because it wasn't serious at all. Bruce Willis is still sexy. Helen Mirren shooting a machine gun is something you don't see every day.

True Grit (The girl and Mr. Bridges) - This one is funny, beautiful, tense, raw and a bunch of other things. I have a special little couch in my heart for Westerns to stretch out on. I love Westerns! I want to make a Western. The Coen brothers have yet to disappoint this little buckeroo.

The conclusion? I seem to like dramas. I knew this all along, without knowing it, you know? I made 2 short films this year and they both tried to be funny. I'll try to get things going in the drama department.

That's about it for me. I must add that I have also enjoyed watching plenty of classic French and Italian movies this year. I talk about it here.

So, what should you do? Watch these movies. The * means that some of these movies are not for everyone. I am not recommending that you gather the family around the TV to watch Black Swan, but in general, the others are pretty okay, 127 Hours might make some people a little squeamish.
Posted by Brett at 7:06 PM 1 comment:

NBA - have fun without me.

Today I would like to share an opinion. This is an opinion article. There is concrete evidence that what I say could very well be fact, and I have done a bit of research, but I have decided to forgo the scientific approach and just speak from the heart.

My skepticism started a few years ago when I bought Slam Magazine for the first time since High School. I had remembered this magazine being full of interesting interviews, articles and photos of the game's top players, coaches, and full of interesting input from fans, journalists and the like.

The issue I had then been holding in my hands was very different. First of all, the main article in that particular issue was an interview with P Diddy. The photos were of NBA stars wearing designer clothes, posing with golden watches glimmering off of the pages. The rest of the articles were apparently written by DJ Scratch, MC Monkey Dance, and Rapper L.L. Delight. I make up these names but the fact that these articles read like rap lyrics showed that the basketball world was zeroing in on a market that did not include me.


Beyond that, lets talk about the game. The NBA is a league of 30 teams. These teams all have a revolving door for all of the players to stroll in and out of. Gone are the days when Magic, Bird, and Jordan would battle year after year for their respected teams. Now we have LeBron's "Decision" prime time TV special, Disgruntled Carmelo Anthony, Expensive players being bought out and shopped around like trading cards. Other than Kobe, every player seems to be on a league wide national tour.

My biggest complaint is the league's seemingly narrow minded plan to focus on their 2 superstars, LeBron and Kobe, and leave everyone else in the dark. The main topics of discussion have turned to when will "The King" win a title? How many titles will Kobe win? Who is leading the all-star voting?

Is anyone else sick of LeBron James? Arrogantly deciding to abandon Cleveland for "South Beach", recently raising the idea of changing the Miami Heat's name to the "Heatles". The racket that this guy and his 2 friends have created in Miami reminds me of those friends some of us had when we were younger. Go to their house on Winter break and they have been sitting inside the whole time with their Super Nintendo playing NBA Jam.

"Hey Billy, what have you been up to?"

"Check it out! I'm the Bulls. I have Jordan, Shaq, and Mark Price on the same team. Shaq just grabbed 50 rebounds! I rule!"

That kind of stuff is fun for kids, and video games, but when, in real life, the 3 hottest young stars in the league decided years in advance that if things aren't working out later in their careers then they can just all play together to win this thing, it seems a little fishy.

Basketball is all about flashy. Who is the latest "high flier"? Did you see that dunk last night when that guy bounced it off of the backboard and did a double pump windmill ally oop?

This image sums up my feelings: 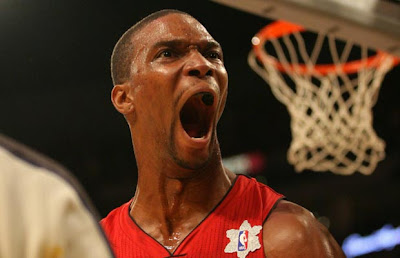 I like teamwork. I like it when baseball players congratulate their teammates after watching them hit a home run or make a nice catch. I like it when hockey players gather around to celebrate a goal.

NBA players, and soccer players for that matter, love to have the spotlight on themselves. Look at me! Look what I can do! I am an animal! I can pull my shirt off, slide down on my knees and lift my gaze to the sky! I swear that these guys think that they can get it done on their own. And though they have a right to act the way that they do, and people actually pay them to act the way that they do, I don't like it. That is my opinion. The NBA has lost me. I am done with it.
Posted by Brett at 11:13 PM 3 comments:

Last night, at 9:30, Barbara told me that she was going to bed. I popped in Inception and we watched it for the first time since we saw it in the theater this summer. 2 hours and 28 minutes later and Barbara says that you know its a good movie when you want to go to bed when it starts and by the time you finish it you are wide awake. Unless watching it was a dream... hmmm.

Speaking of dreamy. Leo Dicaprio anybody?

All of this talk about dreaming makes me think of this: