Something I've noticed these playoffs: 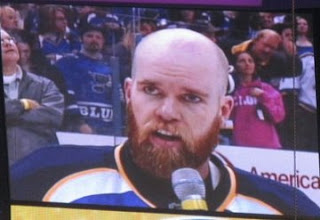 Above is St. Louis Goaltender Chris Mason. It seems as though that beard has been growing for a long time. Should he have shaved fresh for round 1? His team got swept by Vancouver. What is with the massive beard? 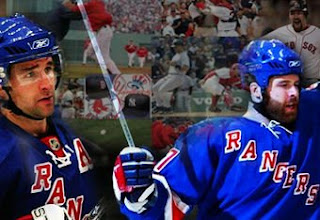 Ranger's defenseman Paul Mara with the bushy beard. I watched him in game 7 against the Caps last night and it almost seemed like the beard was impairing his judgment. Maybe wind was a factor. The Rangers lost game 7 after his team had built a 3-1 series lead.

It seems that these 2 men dared to challenge the playoff tradition of growing a beard during the playoffs by growing them BEFORE the playoffs. The evidence suggests that in the future, players better come clean shaven to the first round. I mean, seriously, what would these beards have looked like if these 2 teams made it to the finals? Insanity, my friends, insanity. Know your limits.
Posted by Brett at 10:19 AM 1 comment: 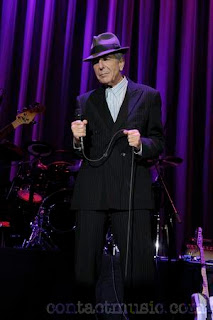 What an interesting night I woke up from this morning. Barbara and Miles were staying over at a friend's house and I had no where to go and nothing to do. After tossing the idea around in my head, I decided I'd fork over the 50 bucks it cost to pay for a nose bleeder seat at the hockey rink to see Leonard Cohen's first performance in Edmonton in over 15 years.

If you're wondering who Leonard Cohen is, he's most notably known for writing the song Hallelujah. To say that's all he's ever amounted to is the understatement of the hour. He's given the world numerous hits and timeless classics all plucked out of his books of poetry and brought to fulfillment with his gravel truck of a voice. I went into this concert expecting to enjoy it. I didn't know I'd be so emotionally affected by this man, coming close to tears and breaking into laughter so many times during the performance.

The show was to start at 8pm. Leonard and his band came out at about 8:01. Dressed in a dark suit with a lazy fedora perched atop his gray head, Leonard Cohen stood humbly, bowing ever chance he could in honor of the nearly sold-out crowd that showed up. Aside from a 10 minute break at 9 and about 4 or 5 encores at the end, He didn't leave the stage until 11:20pm. Some of the highlights:

His interaction with the crowd was humorous and humble. He exclaimed how great it was for them to be performing in this building where "The Spirit of the Great One hovers".

Another great quote was when he mentioned that it had been over 15 years since he had performed in Edmonton: "That was when I was 60 years old... just a crazy kid with a dream."

He introduced his band in a way that I'm sure made them all feel like treasures. "And on the drums, Diego.... our time keeper." "Our bass player, the glue to this whole ensemble."

The thing that I enjoyed most, along with the songs, was the performance. In the song "The Future" after he sang the line "and the white man dancin'" he did a little shuffle for a moment or two. Later in the song he replaced that line with "and the white women dancin'" and 2 of his back-up singers turned around and did cartwheels! It was just a bunch of subtle little stuff that really made the performance. He also spent a long time down on one knee serenading his guitar player.

There were 3 women singing backup. At one point they kept singing a "ba da ba" line over and over at the end of the song at Leonard's prompting. "Please, don't stop. Such a beautiful sound. Please, comfort me just three more times." And then, at the end proclaiming, "I am healed."

I sat next to a nice couple from Saskatchewan, Kevin and Judy. They told me stories of seeing Leonard some 20 years earlier and how his passion and humility hasn't changed a bit. They told me about how he's touring again because he needs the money. Something about a crooked manager stealing all his money while we was living in a monastery on the top of some hill in California. Judy mentioned that the last time they were in Rexall Place was about 15 years ago when they came to see Bob Dylan. They said that his performance was okay, but his opening act stole the show. The opening act was some lady named Tracy Chapman.

My favorite performances of the night were The Future, In My Secret Life, Hallelujah, I'm Your Man, First We Take Manhattan, Bird on a Wire, Dance Me to the end of Love. Basically, it was all amazing.

After three hours of songs I could still think of a handful of songs he didn't sing. The Traitor, That's no Way to Say Good-bye, and That don't make it Junk were all left off of the set list. I could be disappointed, but really, it's an embarrassment of riches and I feel pretty lucky to be apart of what could be his last ever performance in Edmonton.
Posted by Brett at 10:01 AM No comments: 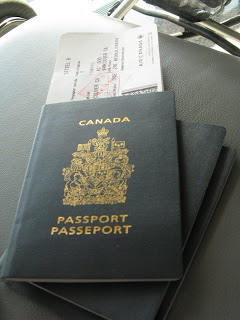 We're back in Canada. It's been about 4 days. Jet lag has won me over. I went napless for the first 3 days, but today I slept from noon until 5:30pm. I figured that it was important to get some sleep since I drive a car now.


A few observations on the flight...

Air Canada flight 30 from Beijing to Vancouver. English announcements are followed by French with the occasional Chinese thrown in in the end. I thought it funny that, on a flight with 80% Chinese speaking people, they would still put French ahead of Chinese. I guess that's the way us Canadians do things.

Holding my 25 pound child on my lap for 10 hours is something I never want to do again. We might need to buy him a ticket next time.

The movie "Yes Man" is pretty funny. Murray from Flight of the Conchords plays the exact same type of character in this movie, but its still very funny.

It's colder here than in Xining. The air is crisp and new. Spring is just around the corner, but the city seems quiet and slouchy. It probably has something to do with the Oilers not making it to the playoffs for the 3rd straight year. I've got optimisim because the coach got fired the day we arrived.

I start work at camp in May, but I got a jump start on things this week by helping out with the dishes. I first worked at camp about 14 years ago doing dishes for my 9th grade work experience. I've come full circle. They bought a new washing machine this winter, so I guess I'm not the only one.

I drove around around the North Side of Edmonton tonight. Explosions in the Sky was playing on the ipod and I was sort of pretending that I was on "Friday Night Lights." I drove by 3 new Starbucks coffee shops. I ended up stoping at a Second Cup, but I'm thinking that Starbucks probably owns Second Cup anyways. You just can't win on the North Side.

I'll throw some pictures up here sometime soon.
Posted by Brett at 8:03 PM No comments: 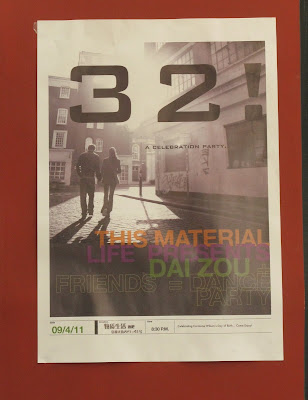 Controversial and slightly infamous rock group "Dai Zou" takes the stage tomorrow night for a quick 6 song set. A ONE TIME ONLY EVENT! Dance party to follow. Be there and be there with your friends and your friends' friends' childrens' friends.

By this time next week my family and I will be on our way from our hotel to the National Airport in Beijing. From there we depart at 430pm on a flight via Vancouver to Edmonton, arriving at 4pm, a half hour before we left. We'll be in Edmonton for 6 months, quite a long time, and the first time I've been in Edmonton in the summer time in 4 years. Edmonton in the summer is dandy.

It hasn't been the easiest last few months here in Xining, though it feels as though this city is buzzing with reality and a lot of good things are happening here. That being said, we're sad to be leaving this place yet happy to go home with the restored desire to grow. We are happy to say that we are not going home weary, but renewed.

This weekend is our friend Carrianne's 32nd birthday party. I say 32 not to embarase her but because that is the name of the party being held in her honor. It will be at a local bar, whose English name is "Material Life". It's actually "Material & Life" but us foreigners seem to think that "Material Life" has a nicer ring to it. Most of us just call it "That bar by Jeff and Carrianne's house". They put the English sign up backwards. 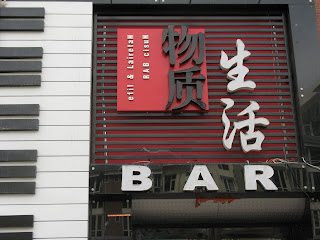 This party will have a live band playing at it and that live band will have me in it. It's going to be a lot of fun. Our band includes Myself, Jeff and Carrianne, Ashok from Nepal, and Hua Sheng from Xining. We're playing a half dozen songs that we've been practicing for about a month now. Here's the list:

As you can see, its quite an eclectic mix. I'm hoping to video a bunch of it and turn it into a birthday gift for Carrianne.

It's pretty funny some of the stuff foreigners can get away with in this country. We made friends with some of these people that hang out at this bar and now they're letting us perform and throw a birthday party there!

The Oilers lost to the L.A. Kings last night, 2-1, eliminating them from playoff contention. I hope they find a way to clean up this mess of a team in the summer. Too many mistakes. (see photo below) 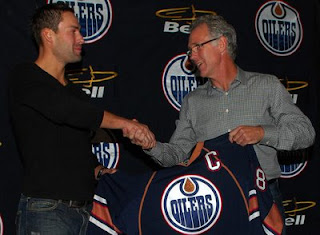