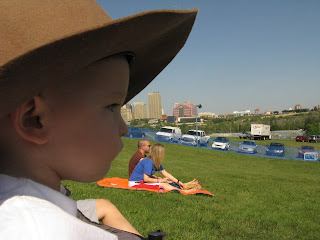 Nestled behind the pyramids of the Muttart Conservatories lies a little place I (and others) like to call the sight of the Edmonton Folk Music Festival. The site is actually a ski hill and at times can feel a little uncomfortable on the backside, but after a while you get used to it and the view is actually pretty decent.

Though the side stages were pretty fun, the place to be in the evenings was at the main stage, or the big ski hill if you will. I only have time to tell you about the evenings... when the magic happens!

Thursday Night gave us Kathleen Edwards. Our spot on the hill was perfect. We sat almost directly behind the big screen in the middle of the hill, but Kathleen made sure she stood near the left center side of the stage so that I could still see her out of the side of the big blue tarp draped over the screen. "Thanks, Kathleen! I'll give you a call sometime this week". 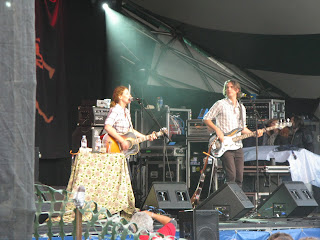 Miss. Edwards brought the sultry soaked sound of her voice for us this weekend. Her sets on the main and side stages were enjoyable, though she seemed to only play a few of my favorites. She belted out lovelies such as Cheapest Key, Asking For Flowers, and Six O'clock News on the main stage and then seemed to play them all over again the next day on the side stage. That might be my only complaint, along with that her set wasn't 6 hours long.

Steve Earle also played on Thursday night. Steve Earle is Steve Earle. He talked a lot of stuff about being from the South and having a lot of wives. I ignored most of the jabber. His music is pretty enjoyable and definitely belongs at the folk fest. The tribute to Townes is nice.

Apparently, Boz Scaggs played after Steve Earle. I don't know this guy at all and we wanted to get home to rest up for the next day. I also had to drop off Barbara and Jonas at the in-laws then drive across town to take the garbage out at the place we were house-sitting at, then drive an hour back to camp to work the next morning. Sorry Mr. Scaggs. Cool name.

Friday... the party started! The Wailers opened up the night concert. The Wailers, being a bunch of young people dancing around singing Bob Marley songs with Bob Marley's bass player. It was pretty awesome. All the hits, except for No Woman No Cry. That's okay because I have a woman and I still cry sometimes.

Next was Neko Case. She seems like a fun little lady. She had a friend on stage whose humor made me laugh inside and out. She referred to her tall and skinny band mates as a "sexy bag of golf clubs". That is something that I think is pretty funny.

I must pause here and say that both Kathleen Edwards and Neko Case have 2 of the best voices my ears have ever met. Soft, soothing... a great thing to listen to while sitting on a ski hill with 20 thousand other people. I'm not too familiar with most of Neko's stuff, just her contributions to the New Pornographer albums I own. Though after this night I will be sure to get my hands on a few more downloads.

Raul Malo played after Neko Case. His band was cool, with a South Beach Miami kind of sound, but I wasn't really into his voice. It was also nice to get home a little early to prepare for Saturday. We were pretty sure that they put these Malo/Scaggs types at the end of the evening so that people could go home a little earlier.

Saturday was a great day. Miles came out during the day performances. It was fun to have him up on the hills. He liked dancing,smiling, slurping sugary lemonade, and meeting new people. He also had a great cowboy hat borrowed from one of the Ranch workers at Nakamun. Thanks, Heather!

We sent Miles home before the evening show so that he could go to bed. The evening was packed.

Johnny Flynn and the Sussex Wit were first up. Johnny is a 25 year old hot-stuff of a man and his band can really pull it all together. Lovely lyrics and a nice little Rufus/Buckley type voice. I am checking out his album A Larum right now!

Bring on Patty Griffin! It was nice to see her sing. A real professional, it seemed. Julie Edgely has a big crush on Patty and I could see why. Another great voice to enjoy.

Iron and Wine came on after Patty. Can it get any better than this Saturday night?! Sam Beam came out band-less but still great. He got Such Great Heights out of the way and kept on with a lot of lovely tunes. My favorite, Naked as We Came, was a highlight. His beard is great! I wasn't aware of it before but Sam was once a cinematographer and taught Film Studies at Miami College before his music took off. He also was writing songs for 7 years before he ever recorded anything. A successfully bearded man he is!

Rodney Crowell was pretty boring. Sorry fans, but when he started talking about imagining if his imaginary twin brother had imaginary HIV and that he wrote an actual song about it, I started to wonder what was going on. Was I still on the hill? Was I still me? What?

Top Highlight of the Festival:

Sharon Jones and the Dap Kings. 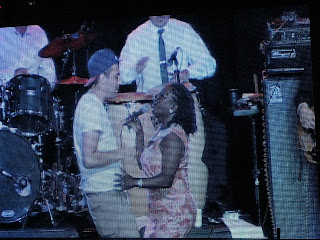 This was the night we would not go home early! After a classy introduction here the band warmed up and Sharon swiggled out onto the stage. "Swiggle" might not be a word, but I'm sorry, that's what she did! The dance crowd spilled out from the "dancing" section onto the whole hill. The spill actually went UP the hill! We were all on our feet for most of the show. Miss Sharon brought on a couple of funny dudes from the crowd to dance with and one freaky one. She took us through the evolution of the "shout dance" that apparently is a combination of her African and Native American roots.

It was simple energy. She danced and sang late into the night and about 45 minutes into the morning. We all went home happy. Some of our friends who volunteered at the festival got to meet Sharon later that night at a party. Lucky!

Sunday was good, but it was no Saturday. There were some notable names playing in the evening but we decided to leave before then. We caught a small Jill Barber concert in the morning and then a free Pitcher of beer from our Auntie in the beer gardens (Thanks, Kathie!) before we headed up the hill to see Arrested Development (the band not the show) in the sunny afternoon. Miles danced and we all sang along. Some of the folks went up close to the stage to dance and they thought it was a good time. Speech and the gang sang all the hits and their new stuff wasn't that bad either.

Some other performers who were nice to hear throughout the weekend; Joel Plaskett, The Heritage Gospel Choir, Hang Gai from China, Fred Eaglesmith, Danny Michel, Ashley MacIssiac, and some of the Under 22 performers. One of them was overly dramatic and kind of silly to watch, which was also a highlight of entertainment.

That might be all I have to say about the music. The food seemed to be normally priced. You could even buy a can of soda pop for a dollar from the "Nut Man". The weather was too perfect. The friends and loved ones were plentiful. Thanks for the great weekend!

Jonas had a great time, too. 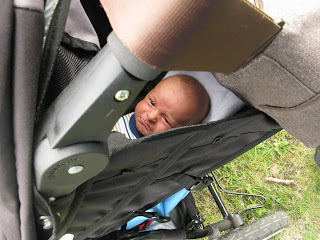 Just so you know

- I have to admit that I like the CFL. I like it for it's tradition, it's excitement, and that I grew up with it roaming around the hallways of my heart.

The 2 things that I don't like about the CFL are the "3 minute warnings" instead of the NFL's "2 minute warning" and that the MVP of the league is actually called the MOP for "Most Outstanding Player". That is silly. That is unnecessary. It is something that makes me laugh and cringe at the same time when I hear it being said.

- The TV show "The Dragon's Den" is entertaining and informative.

- In the previous sentence I accidentally typed "nad" instead of "and".

- CBC radio 1 is great to listen to while you hammer wood and screw in nails.

- The shallowness of the world is a sickness that we are to shallow to admit exists.

- Still waiting on an e-mail from Kona.

- I weigh 221 pounds. It must be from all of the things weighing on my mind.

John 5:22 "...the Father judges no one, but has entrusted all judgment to the Son.

John 3:17 "For God sent not his Son into the world to condemn the world; but that the world through him might be saved."

Something to remember the next time you hear someone say that "God will be your judge" or that "God will get him in the end" or something along those lines. What's my point? Not too sure exactly what. I'm still working on it. But it is these kinds of things that I read in the Good Book that make me think that a lot of us are looking at things the wrong way.
Posted by Brett at 9:32 PM 3 comments: