Gitz Flickz Pickz - Money might not sleep but Brett sure does 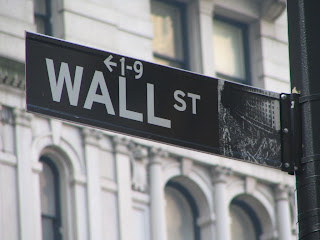 The last time I talked about a Neo-Realism film about a little Middle Eastern girl and the world around her.

Today I am going to take you down a different path. Hang on to your popcorn!

The films I watched last night were films I was not expecting to enjoy at all. In fact, the only reason why I was watching them was because I had both of them, a couple of free hours, and a Canadian Club and Coke. So it came as quite a surprise that I actually enjoyed the experience. Although I am not absolutely sure why I enjoyed it, let me share a few thoughts that could possibly help explain things.

First of all, Wallstreet is from the 80's. I thought that this would be slightly noticeable in the style of the film but I was way off. It was very noticeable, and for that reason, hilarious! A couple of the highlights:

1. When Gekko shows Bud Fox (who made up these names anyway?) a portable T.V. with a 2 inch black and white screen, we are all led to believe that this was the latest technological advance at the time. I am sure that it was but its funny to think about it.

2. At a party for rich people, there is a robot waiter, complete with a robot tuxedo. I am not joking.

3. The cell phones in this film are just a little bit smaller than a football.

5. The Sally Jessie Rafael glasses worn by Bud's coworker Marvin, among others.

"The year end quota is being bumped down on a low premium of 3.7% interest on a sum number directly deductible by the Dow's Late November stumble into the Black. We are sitting at .9 on the dollar, plus 6% mark down."

As I said, despite the confusion I was still tracking. Bud Fox is an up and comer because he kept pushing forward in the business. Finally, when he has made it to the top he is confronted by difficult choices. Then we must find out what he's really made of.

Not that this was an amazing movie, but I would suggest watching it before you watch the sequel. I mean, it's hilarious! 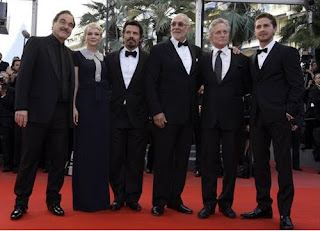 Now, on to Wallstreet - Money Never Sleeps. The title is in reference to a street in New York where people trade a lot of money represented by ridiculous numbers and the fact that while all of these people are sleeping in their beds in New York, other people in Hong Kong are awake, trading the same numbers. Hence, money never sleeps.

This movie is far more interesting than the first. The topic is still confusing for an ignorant person like me, but the story is very nice to watch.

The main reason why this one is better is because all of the actors are so dang good. I mean, if there was a movie called "Pea soup and the Pirates who love it" starring Michael Douglas, Shia LaBeouf, Carey Mulligan, Josh Brolin, Eli Wallach, Susan Sarandon and my recent favorite Frank Langella, I'd probably watch it. Oh, and directed by Oliver Stone.

I don't want to give away too much, but Gekko gets out of jail at the time when the world is in financial chaos. Meanwhile, a young stud of a stock broker wants to marry Gekko's estranged daughter. It is similar to the first film, but the acting and the situations are a little more believable and the acting is a lot more memorable.


Both films are filled with great shots of New York's skyline. On top of the obvious changes there are a lot of small ones that the skyline shots capture. Oliver Stone's movies have always had a unique style and these ones are no different. The camera work in both movies is smooth and fun to watch.

So, if you have time, take a look at these films. At least watch the second one. Carey Mulligan is a treat to watch. Frank Langella is great as well. If, after watching it, you find that you agree with me, then check out Mulligan in 'An Education' and Langella in 'Frost/Nixon'. These are 2 of my favorite films from this past year. Great stuff.
Posted by Brett at 6:48 PM 2 comments: 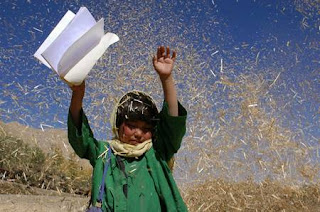 This past week I went down to the DVD store to try to stock up on a few morsels to view during this chilly season. I was able to come out of there with a few surprises. I had no idea that I could get my hands on some Jean-Luc Godard films, along with Truffaut's supposed classic Day for Night (supposed because I still have not watched it).

I really got into French films during my film school this past Spring. I had a list of over 100 movies to watch before the school and 2 of my favorites were French, Rififi and The 400 Blows. I would recommend that you watch these two at least. Add Jules and Jim and Breathless to the list if you have the time. They are probably available for free to rent at your local library. That is, if you live in Canada.

Anyways, another one at the store that looked interesting is Buddha Collapsed out of Shame (2008). It is, in fact, and Iranian film, shot in Afghanistan, I believe. It centers around a little girl who is trying to get money to buy a notebook so that she can go to school. A mix of reality and perhaps the imaginations of the children in the film, this story is very easy to get into.

It is Neorealism, and it is done very well. All of the actors are non-professional and the stories main character could very well be the village itself that this story is set in. The idea of Neorealism is to give the viewer a glimpse of what life is like in this area and to also bring them into the lives of characters that are no doubt modeled after real people.

Watching movies like this gets me excited about the possibilities of making similar Neorealism movies here in this area of China. 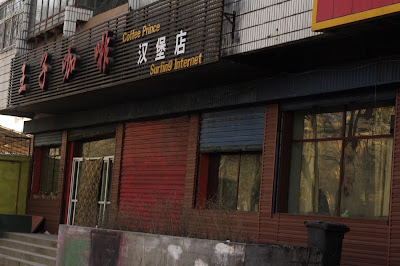 We live on the East side of town. It has it's perks; quieter, close to the school, other cool people live over here. The draw backs are that its a 10 元 taxi ride to downtown. Downtown is loaded with the hustle and bustle of people walking all over the place. Actually, not as much bustle as there is hustle. Good curry, the gym, the sports field, good Western food at Bill's Place and The Greenhouse are all within walking distance of each other and sometimes I can't help but wonder what life would be like if we lived downtown.

Anyways, today was a day when I decided to rebel against these thoughts. I moved in the opposite spirit and I went to "Coffee Prince" and got a cup of coffee to go. Coffee Prince is a place located across the street from us. It started out as a cafe. It quickly (almost over night) turned into a place where students can buy cheap beer and play cards. The truth is that I went outside to run some errands and I was not prepared for the chill in the air. Under dressed, I needed something to warm up my bones. I went into Coffee Prince with the hope of finding something hot to drink. It didn't really matter what it tasted like.

In 2008, about a month after Coffee Prince opened, I went in to get a coffee on the way to class. At the counter I stood in awe as the man filled up the coffee maker with water and re-used the cold, slimy grinds that were still inside. I took the cup, sipped at its lukewarm contents, and I never returned.

Back to the Future:

But today I went in... and I ordered again, dang it! This time the owner made my cup. She called me over when it was ready. She had some sort of weird system of making coffee involving a pitcher with a mess filter built into the side of it. I didn't ask any questions. I took it to go and it was hot! I thought that no matter what this tastes like, its already an improvement. I sipped it and it tasted like a crappy cup of coffee. The funny thing was that it was cold out today and a hot drink was all I needed. It could have been hot cat milk and I would have drank it. And even though it was a crappy cup of coffee, it was MY Neighborhood's crappy cup of coffee!

My Neighborhood!
Posted by Brett at 8:57 AM 2 comments:

For those of you interested in coming to visit, here is a website with all of the sites and sounds of this beautiful city:

http://www.tresxining.com/tresxining/Home/Home.html
Posted by Brett at 5:09 AM No comments: